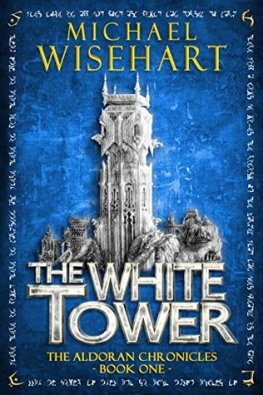 The White Tower by by Michael Wisehart is the first book in the series The Aldoran Chronicles.
This is now one of my favorite books. Below is my review that I posted on Audible.
Would you consider the audio edition of The White Tower to be better than the print version?

I’ve only listened to the audio version. I will say that as much as I love the narrator, I’d probably prefer it in hard back. This story switches between A LOT of characters, which I find frustrating at times. I like to follow the character arcs of only one or two characters at a time. The print version would allow me to follow one character and then go back and read the stories of the other characters (or skip the character’s I don’t care about). It is too hard to do that with the audio book.

What other book might you compare The White Tower to and why?

This is my favorite book since Michael J. Sullivan’s “Riyria Revelations” (also narrated by Tim Gerard Reynolds). I consider both books a “page turner”, and I have a hard time putting either of them down.

I will say this book is more violent than the Riyria Revelations; it is not really graphic in its violence, but the torture instances make me a little uncomfortable, so very sensitive readers might get a bit squeamish, again not graphic, just the description of the pain that the character’s face is kind of uncomfortable.

Have you listened to any of Tim Gerard Reynolds’s other performances before? How does this one compare?

I’d actually even say this is his best narration yet, but then again, I’ve never listened to a bad narration of his. There are a lot more characters in this book than in others he’s narrated, and he does a superb job making each of them unique.

Did you have an extreme reaction to this book? Did it make you laugh or cry?

The torture scenes make me a bit squeamish when the pain the people are experiencing is described. The scenes aren’t graphic like rated-R films; there is no graphic blood or extreme description of torture techniques, but the thought of the torture and the people’s pain still makes me uncomfortable (as it should).

I will say that during heightened intense moments, the author knows how to throw a bit of humor in there. So, there are definitely some nice laughs along the way.

I think the author does a great job of capturing the human person, showing a wide range of emotions from all characters. The character’s are human despite being set in a fantasy world. I think this is one of the first books I’ve listened to/read that you really connect with and empathize with the characters, even those that make questionable decisions. (Not so much the truly evil characters; they are evil, but some that border evil or simply make questionable choices – those you really get to empathize with or at least understand why they did what they did.)