Take a trip to Arizona with Marcus Lear in J. Kevin Earp’s newest book, Strong Evidence. In this fourth installment of the Marcus Leary Mysteries, a disagreement between Marcus and Jenny (his girlfriend) causes a rift in their relationship. Needing to get a way for a little while, Jenny leaves Perrys Island without telling Marcus where she is going. As a result, when a missing person’s case in Arizona makes its way to Marcus, he is forced to accept it and work it by himself.

During his investigation, Marcus discovers a link between Jenny and the missing person. Could Jenny be involved in the victim’s disappearance? Marcus doesn’t think so, but local law enforcement do. After all, there is strong evidence indicating Jenny’s involvement. Can Marcus discover the real culprit, prove Jenny’s innocence, and find the missing person before it is too late?

Well, I’m not going to answer that question…you will just have to read it to find out.

Finding good books can be a challenge. Good books for me usually mean – clean (no sex and limited to no profanity), an engaging storyline, and believable characters. I really think it says a lot about an author who can craft a story without feeling the need to include “adult content”. Because of my unusually high standards, I often find it hard to discover good books. So I was pleasantly surprised when I discovered Ascendant (Songs of Chaos Book 1) by Michael R. Miller. It meets all my qualifications and is story I can recommend to anyone (child and adult), without reservations.

“Holt Cook was never meant to be a dragon rider. He has always served the Order Hall of the Crag dutifully, keeping their kitchen pots clean.

Until he discovers a dark secret: dragons do not tolerate weakness among their kin, killing the young they deem flawed. Moved by pity, Holt defies the Order, rescues a doomed egg and vows to protect the blind dragon within.

But the Scourge is rising. Undead hordes roam the land, spreading the blight and leaving destruction in their wake. The dragon riders are being slaughtered and betrayal lurks in the shadows.

Holt has one chance to survive. He must cultivate the mysterious power of his dragon’s magical core. A unique energy which may tip the balance in the battles to come, and prove to the world that a servant is worthy after all.”

Miller describes this series as “combining the best of Eragon/How To Train Your Dragon with eastern inspired magic systems of Xianxia and cultivation fantasy”, and I would agree. However, I would take it one step further and say that Miller’s style of writing is far more developed than Christopher Paolini’s Eragon. (Don’t get me wrong, I loved Eragon and read and re-read it as a teen.) However, Miller’s Ascendant delves more deeply into the characters; you see the character’s internal struggles, which makes them more relatable and even more courageous because you know their fears and insecurities.

What I liked most about this story is that it affirms the dignity of life, even that of the unborn. Holt is tasked with destroying a dragon egg because the Matriarch sensed an imperfection in it. However, Holt is unable to follow through with the task because it “just feels wrong” (Chapter 5). Later, when an opportunity presents itself, Holt rescues the dragon egg, intending to protect it until he can release it into the wild. Of course, things don’t go as planned, and the dragon egg hatches before Holt can release it. The dragon inside is blind.

As the story continues both Ash (the dragon) and Holt face many obstacles, one of which is the hostility of the other dragons who believe Ash should not be allowed to live. Holt feels increasing guilt for the struggles Ash faces, both because he is blind and because he is ostracized by the other dragons. When Holt mentions this to Ash, Ash sums it up quite nicely saying “Never worry about my eyes – I’m glad to experience the world as I do rather than not at all. As for others of my kind, they can accept me or not as they choose. I will not allow my own worth to be determined by them.” (Chapter 54)

In today’s society where we can abort the unborn simply because we do not want the responsibility of raising a child or because the child is going to be born with “imperfections” (disabilities/deformities), this book provides a reminder that all life has value. Whether or not the author intended this, I do not know. However, I will say it is refreshing and one of my favorite aspects of the book. I look forward to the second book in the series and in the meantime will enjoy his other book series – The Dragon’s Blade.

I will be adding this book to my Favorites list, and it has even made it in the top-10.

I’ve been pretty quiet lately, mainly due to the lack of reading or watching of anything worth writing about. I’ve spent most of my time binge watching NCIS and PSYCH.

However, I am pleased to report that I have FINALLY discovered something worth writing about – Elizabeth’s Legacy, the first book in the Royal Institute of Magic series by the late Victor Kloss.

Two years after his parents’ sudden disappearance, Ben Greenwood stumbles upon a cryptic letter that could shed some light on their whereabouts. But before he can track them down, he’ll need to find the mysterious organization that sent the letter: The Royal Institute of Magic.

For those of us who loved the Harry Potter series, you will definitely see some parallels – orphaned British boy, unpleasant relative, hidden magical world. But if you give it a chance, you will soon discover a unique, clever world that, aside from those few parallels, is not anything like the Wizarding World of Harry Potter.

The magic of Taecia is not dark. In fact, it is almost a science, which is a clever spin on the magic we are familiar with. The humans of Taecia live a life fully integrated with the non-magical folks, using cell phones, computers, etc. Fun fact, they even attend school in the non-magical world!

There is little to no profanity which is often unheard of in books these days, and I love the camaraderie between the main characters. Their loyalty and sense of humor – especially Charlie’s (Ben’s best friend) is truly appreciated.

This is one of those rare, clean books that parents can enjoy with their kids. So, check it out! 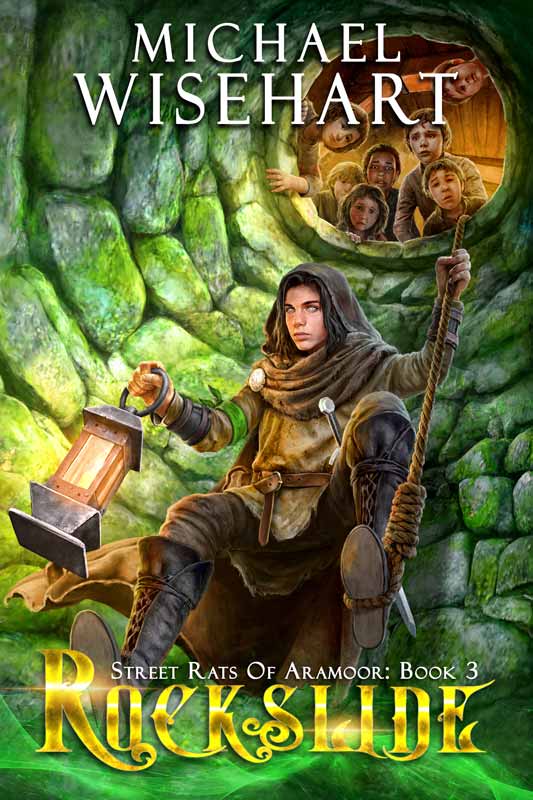 Michael Wisehart is one of my favorite authors, alongside Michael J. Sullivan, John Bierce, and Brian McClellan. So, I was extremely excited to be part of the “review team” for Rockslide, the third installment of the series Street Rats of Aramoor.

In this book, Ayrion finds himself responsible for a group of outcasts from the various street tribes of Aaramoor. Starving and harassed by the other tribes, the outcasts are struggling simply to survive. Feeling the burden of leadership, Ayrion and his friends Reevie and Sapphire endeavor to save the outcasts as well as the members of Hurricane by earning entrance into the Guild. However, nothing is ever easy, and several members of the Guild are eager to see the demise of Ayrion and the Hurricane tribe, so they ask an impossible price, one that Ayrion cannot pay without extreme risk to his life.

If you have not already done so, I suggest re-reading Hurricane (the second book in the series). It has been a long time since I read it, and consequently, when I started reading Rockslide, it took me a while to recall who the various characters were and how they related to one another.

As I said before, Michael Wisehart is one of my favorite authors. I enjoy the way he writes. Personally, I thought Rockslide was a little slow, but that may be due to the fact that I know where the story is going. I have read, and truly love, The Aldoran Chronicles and know the role that Aryion plays in that series. Consequently, I am very eager (one might say impatient), to see how he gets there. However, Rockslide, like the other Street Rats books, primarily still deals with Aryion’s life on the streets of Aramoor. So, I guess I will just have to learn to be patient while I wait for Aryion to grow from being a street rat to the character he is in The Aldoran Chronicles.

“Mousetrap. I wanted to play Mousetrap. You roll your dice. You move your mice. Nobody gets hurt.”

– Bob the Tomato, VeggieTales’ The Toy That Saved Christmas

Whenever I hear the word “Mousetrap”, that scene from VegeTales immediately comes to mind – a bunch of vegetables conversing after a sledding accident in which Bob the Tomato’s eyes and nose fall off. But J. Kevin Earp’s The Mousetrap Killer puts an entirely different perspective on the word: mousetrap.

The Mousetrap Killer is the third book in the Marcus Lear Mysteries by J. Kevin Earp. While the first book, Murder on Perry’s Island, is by far my favorite due to the major role that PTSD plays in the story, The Mousetrap Killer is my next favorite. There is something about a serial killer that ups the suspense and intensity in a story, making it harder to put down.

So, if you like playing detective and want a high-stakes case, check out The Mousetrap Killer: Marcus Lear Mysteries, Book 3. As with the other books in the series, J. Kevin Earp provides you with all the details you need to solve the mystery along with Marcus and his team. You are not only a reader, but a detective as well.

*I am related to the author and was provided with a copy of “The Mousetrap Killer: Marcus Lear Mysteries Book 3” free of charge in exchange for my review. I received no monetary compensation.